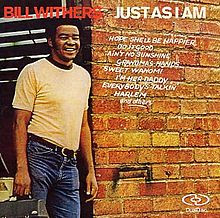 Bill's debut. and what a way to start.  Gritty but danceable soul anthem "Harlem" together with the plaintive tender love song that is "Ain't No Sunshine".  His interpretations of "Let It Be" and "Everybody's Talkin" both stand up as he makes them his own.  To the fore are the personal writings of a regular guy whether talking about relationships with girls or recalling his "Grandma's Hands".  This later track would be covered by many, latterly on John Legend and The Roots "Wake Up" which was a faithful but full-on tribute to a classic.  I love "Do It Good" and "Hope She'll Be Happier With Him"

This is a great album which together with the follow-up "Still Bill" shows how to start a career - they still feature on my playlist with great regularity.  Both of these are available on CD and as a twofer on one CD from Raven Records.  If you don't have them you are missing out.

Another album from that classic year 1971
Posted by BoyRed at 19:57