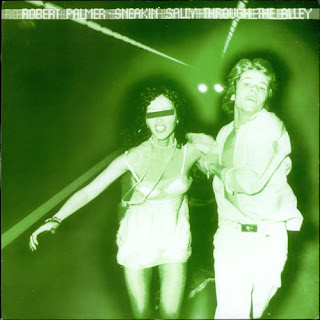 My first knowledge of Robert Palmer the solo artist was from hearing a great band play the first three tunes from this in the Green Man pub in Leytonstone.  It was a favourite place at weekends in the 70s and the quality was very high.  In "74 the house band played "Sailing Shoes", "Sneaking Sally" and "Hey Julia" as one long sequed medley in their set - just as it can be found here.  I thank them for the introduction as this and subsequent albums from Mr Palmer are amongst my favourites.  The base tracks were recorded at Muscle Shoals, in Alabama, in New Orleans with members of the Meters and, with Lowell George of Little Feat - what a way to start.  The feel of this is soundly a British white soul album and with the class of musicians involved and Palmer (and producer Steve Smith's) vision of how it should be - the results are amazing.  The original tracks are from an initial list of songs which also bacame the base for the follow-up  "Pressure Drop" - another gem.  Phill Brown's Book - "Are We Still Rolling?" - narrates the recording of these two albums and informs the idea of a quest for the right feel and sound for this Yorkshire boy making fabulous american music in his own way.  This was actually quite ground breaking in it's straightforward approach - I was a soul fan who did think that white men could sing the blues - if ever i needed evidence this was there waiting.
Seek this and his others out in their original forms - as albums - and forget all those compilations of Palmer's work.

A note on the artwork - aparently the cover shot was taken in the middle of the night in the Heathrow airport tunnel with the photographer hanging out of the back of a pick up.  Palmer fans would see him wearing that rocket/bullet belt in various shots and get used to the Robert with beautiful woman covers - this was long before the image projected by the "Addicted To Love" video.
Island Records
Posted by BoyRed at 21:04